The Shinnecock Monument is an economic development project launched in early May 2019. The Shinnecock Nation’s goal with this project is to generate revenue to provide for its people. Being a sovereign nation, The Shinnecock Nation maintains the right to build on its land and pursue commerce free from civil regulatory restrictions improperly imposed by New York State.

The Nation entered into a contract with the billboard company Iconic Digital Displays, LLC, to erect two double-sided billboards and share the revenue to economically advance the Shinnecock people.1 The construction for the 61-foot-tall electric monuments begins.

As construction continues, an update from the State Department of Transportation and the state attorney general’s office was that officials were still reviewing the matter and whether the state has any jurisdiction over the proposed signs, which are located on tribe-owned land on both sides of the highway.

Local municipalities are using their influence—if any at all—to persuade the Nation to immediately stop working.

Tribal lands are exempt from federal highway regulations, so the federal bureau’s determination over the Sunrise Highway land could impact the state’s application of federal highway law.2

Construction completed on the southern billboard. Regardless of whether or not the tribe acknowledged the state TRO, Chairman Brian Polite said that they were waiting for materials to arrive, so construction on the second billboard was not scheduled for a while anyway.3

Shinnecock Indian Nation leaders and the billboard company the Nation hired to build the 61-foot signs on Sunrise Highway say that enforcement actions by New York State and the Town of Southampton to try to halt the project have taken a toll on both the project and the tribe.

Larry Clark, a manager of the billboard company Iconic Digital Displays, LLC, filed an affidavit in State Supreme Court on June 6 alleging that the state’s and the town’s stop-work orders caused advertisers, vendors, banks and subcontractors to express concern over the status of the project, resulting in financial losses and a damaged reputation for his firm.

Tribal Council Chairman Bryan Polite said this week that the interference and resulting delays forced the Nation to postpone for months some public assistance programs that were scheduled to start soon, to be funded by proceeds from the billboards.3 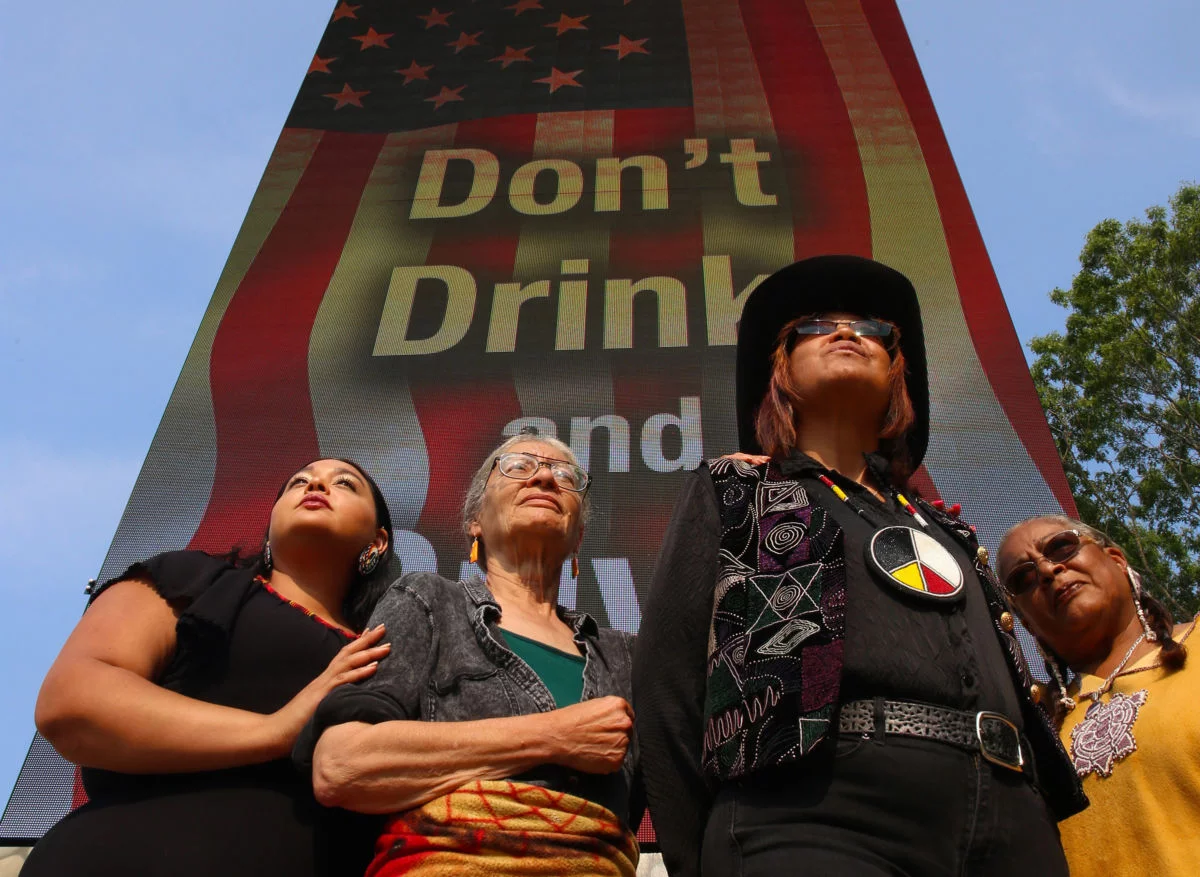 In an article featured on truthout.org, Southampton Supervisor Jay Schneiderman expresses his opposition to the project5;

“The town is appalled by what is going on. I mean we are outraged,” Southampton Supervisor Jay Schneiderman told CBS New York in a recent interview about the tribe’s signs. Schneiderman expressed concern that the signs would present dangerous distractions to vacationers from New York City headed to the Hamptons along New York State Route 27, also known as Sunrise Highway. According to Schneiderman, the signs would be better suited for Times Square rather than the farm country of the Hamptons.

The Shinnecock Monument project is highlighted in Vanity Fair on the web6;

The Shinnecock Indian Nation, which predated the elite New Yorkers’ presence in the area by centuries, has been erecting two six-story, electronic billboards along Sunrise Highway (also known as the 27). Local and state officials have been peppering the tribe with complaints and stop-work orders, but the tribe, amazingly, has flatly rejected their jurisdiction. Southampton’s town supervisor told the New York Times that the signs “violate the spirit of our local ordinances meant to protect the rural character of the town,” but Bryan Polite, the tribe’s chairman, responded by saying that the Shinnecocks “don’t recognize their authority on our sovereign lands.” Tribal officials say they need the revenue from the billboards to provide for their members, but 30 local elected officials sent the tribe a letter asking them to, as the supervisor said, “develop other economic engines.” Easier said by a Southampton official than done by a tribe robbed of ancient lands?

The Shinnecock Monument featured cast and crew from “The Daily Show with Trevor Noah” who filmed a segment about the Nation’s billboards along Sunrise Highway for the show.7

“Daily Show” correspondent Michael Kosta made an appearance both on the electronic screen and in person, accompanied by Tribal Council Chairman Bryan Polite and other Shinnecock members. The on-screen display read, “Relax, and enjoy your stolen land. Brought to you by Michael Kosta.”

The comedy segment is set to air in September, according to a Facebook post from Mr. Polite.

“Big thank you to Trevor Noah, Michael Kosta, and the production crew of the Daily Show for bringing attention through comedy to a very important issue for the Shinnecock Nation,” Mr. Polite wrote in the post, which has already received a lot of attention and shares in less than 24 hours.

During its mid-year meeting, the NCAI unanimously approved a resolution sponsored by the Shinnecock Indian Nation’s Vice Chairman of the Council of Trustees, Lance Gumbs, that backs the Nation’s project and others like it.