Sugar Loaf Hill is an Orient Period burial site facing southeastern, the only Orient burial site known outside of the North Fork of Long Island. During the 20th century, despite being known and marked on maps as early as 1797, the burial grounds were desecrated and developed for a contemporary residence. 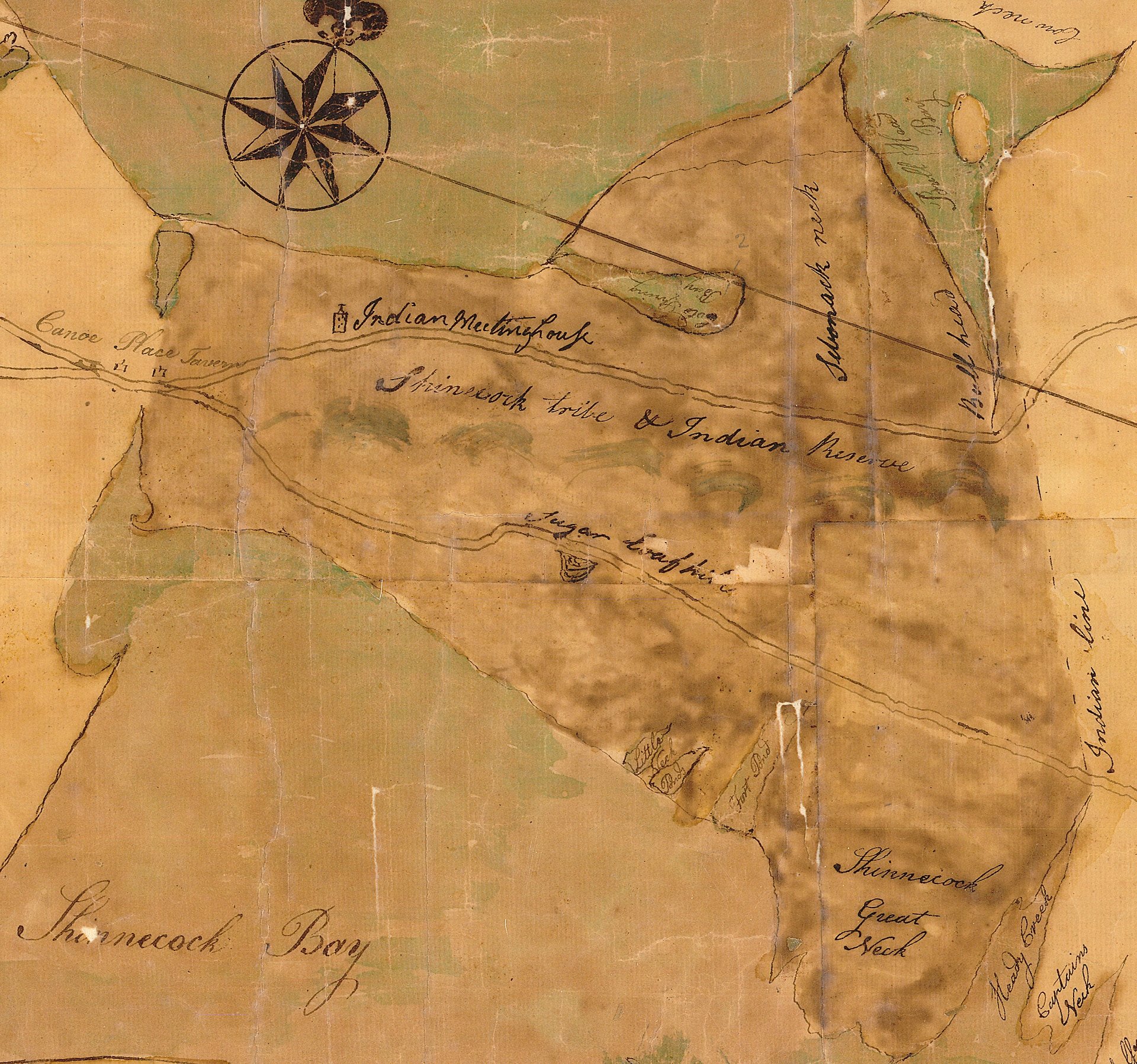 The Belcher Hyde map of 1916 is the first to document Sugar Loaf Hill, forty years before being developed. 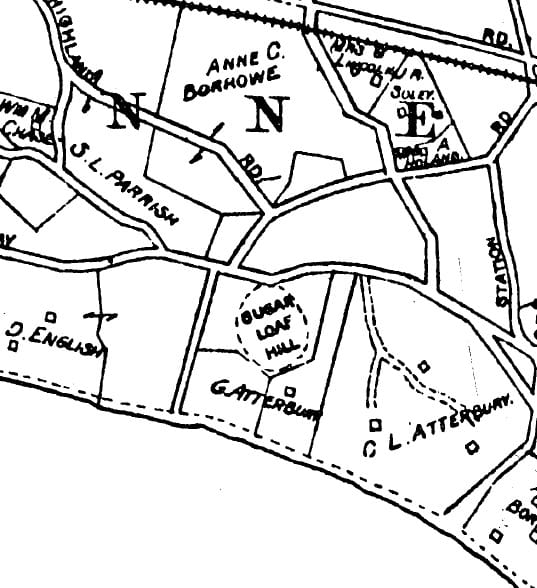 Aestell Atterbury owned the hill before Michael Nappa before she had died.

A group of Shinnecock including John Strong and David Martine confronted the Town board about the mistake of granting a building permit to the site.1

The destruction of Sugar Loaf Hill occurred just two years before the Native American Grave Protection and Repatriation Act. This Congressional Act required all institutions that receive federal funds to inventory their collections of Indian human remains and artifacts, make their lists available to Indian tribes and return any items requested by the tribes.2

On April 10th, 2013, members of the Shinnecock Nation protested a housing development in the Sugar Loaf Hill area, down the road from the burial hill site. Below is an article from 27 east. 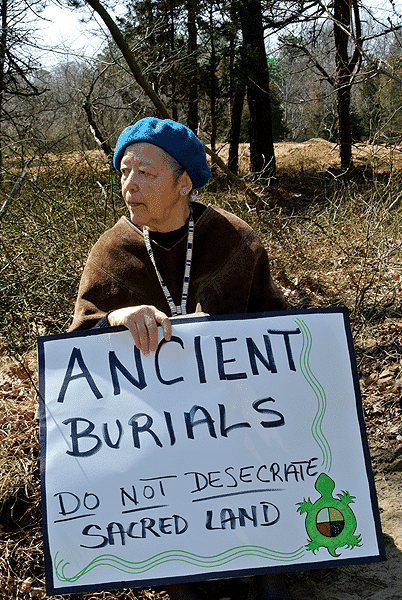 Elizabeth Thunderbrid Haile at the protest on Montauk Highway on Tuesday. Photo by Dana Shaw

A cluster of tribe members gathered at the site of a new residential construction project on Tuesday. No work was going on at the site on Tuesday, but a new driveway had been cut into the property and excavation had begun where the house’s foundation will go.

“This land is part of our ancestral history and remains hallowed and sacred to the Shinnecock Indian Nation,” said a statement released by the tribe on Tuesday morning. “Tribal members are protesting more development in this area where many ancient Shinnecock cultural and funereal artifacts have been uncovered.”

A few hours later, before the Town Board, some of the same tribe members who had held signs on Montauk Highway that morning sat solemnly listening to the Town Board members debate legal particulars of state legislation to codify strong protections of Native American grave sites. The board was considering a memorializing resolution—simply an official voicing of support by the board, carrying no legal weight—but one that has been a topic of divergence on the board for months.

The new house that drew the protest on Tuesday is going up in the same area where the development of three lots on land that the Shinnecocks say were their ancestors’ burial grounds centuries before European settlers arrived in what is now Southampton and Hampton Bays drew outrage and protests from the tribe in the late 1990s. That property was near but not within a recognized and protected Native American burial ground known as the Sugar Loaf Hill Shinnecock Indian Burial Grounds.

The tribe has been petitioning the town for formal protection of ancient burial sites, both known and yet to be discovered, since 2005, following a years-long battle over remains found during the clearing of the former Hotel St. James property in Water Mill.

State Assemblymen Fred W. Thiele Jr. and Steve Englebright introduced a bill providing strict protections for remains to the State Legislature that year. It has yet to be brought up for a vote.

In the boardroom on Tuesday, members of the tribe implored the board to take action on their behalf.

“This hole has been dug in the hills for another residence,” tribe member Becky Genia said, proposing that the hole dug for the foundation should instead be used to return the 16 sets of remains of Shinnecock ancestors, which have been uncovered by development over the years, to the hills that bear their name. “You may not desecrate our hills anymore.” 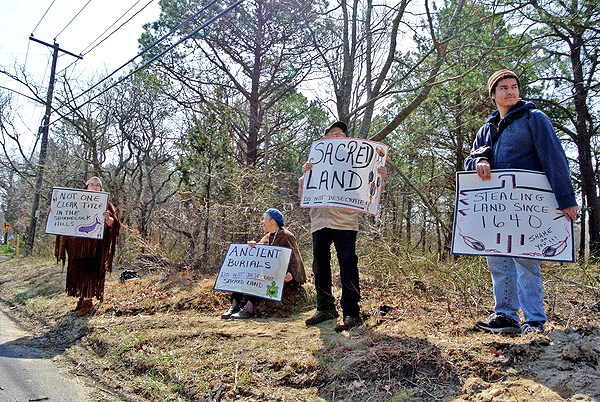 Members of the Shinnecock Indian Nation protested the continued development of the area of Shinnecock Hills known as Sugar Loaf, which they claim as sacred ancestral territory. DANA SHAW

Councilwoman Bridget Fleming again proposed the memorializing resolution she has been pressing for months, throwing the town’s support behind the state legislation. With the tribe members looking on, Ms. Fleming said she planned to insist that the resolution be voted on by the board, even while acknowledging that she did not think it would garner enough votes from other board members to pass.

Other board members raised doubts about the state legislation, noting that since the bills have not yet been brought up for debate, they could still be modified, and the town might not necessarily agree with the final proposal. But the main hang-up, as it has been for seven years, continued to be that a provision in the legislation says any human remains discovered must, in “practicable” cases, be left in the ground where they lay—a wrinkle that attorneys and business interests have said is too vague and could disrupt business, unfairly restrict property owners and violate constitutional rights.

“The very crux of the state law is that the remains have to stay in place, on the site, which is what we haven’t been able to come to consensus on,” Councilwoman Christine Scalera said. “I still think we need a town policy, but I realize we’re at an impasse about the removal from the site.”

Councilman Jim Malone said that the legal hang-ups are unfortunate, because he thinks there is strong support for an official policy regarding native remains. Ms. Fleming was nonplussed and took Mr. Malone and Ms. Scalera to task about their steadfast opposition to the mostly symbolic resolution. “It depends on what you mean by support—whether you favor the protection of remains over property rights,” Ms. Fleming said. “That’s where the rubber meets the road. It’s not real support if you can’t even vote for this.”

The resolution failed, with only Ms. Fleming and Ms. Throne-Holst voting in favor. Ms. Scalera voted no, and Councilman Chris Nuzzi and Mr. Malone both abstained, with Mr. Malone explaining that he could not vote for a resolution expressing support for the state bills when he does not know what they will contain if they are ever adopted.

Ms. Fleming nodded to the respect and reverence given to history just moments earlier by the Town Board, which granted landmark status to two North Sea Road homes, originally built in the 1700s. Yet, she noted, the board could not find a way, after years of appeals from the tribe, to formulate a policy on protecting the remains of the area’s first residents.

“I think there’s a certain cruel irony in today’s meeting. We’re landmarking two structures from the 18th century, a hundred years after the Europeans settled here and thousands of years after Native Americans arrived,” Ms. Fleming said. “It’s frustrating to me that we are unable to come to consensus about protecting Native American burial grounds. We’re talking about the inhabitants of our land. We’re talking about human remains.” 1

This is one of the two sites which yielded pottery fragments. Approximately 25 sherds representing two vessels were found near the north end. The northern half of the floor was described as having a “shingled” assortment of fragments belonging to four or five large stone pots. An associated cache contained celts, pestles, paint stones, a gorget, and over 30 projectile points.

The Sugar Loaf Hill Burial Site has been desecrated by housing development.

The Following a copy of a letter to Town Supervisor Mardythe DiPirro and the councilmembers of the Town Board, submitted for publication by the authors:

We, the concerned members of the Shinnecock community, the Shinnecock Coalition against the desecration of Sugar Loaf Hill, are contacting you to express our anguish over the destruction of our ancient burial grounds and to seek your support in facilitating action against further desecrations. We are aware that you have been appraised of this situation. However, to this date, there has been no official town action taken and we are greatly disappointed.

Sugar Loaf Hill has been destroyed. We propose a public policy that protects archaeologically sensitive areas from destruction. We have watched the town spend time and money to preserve and highlight the relics of colonial past. (This colonial history is a relatively short one in comparison.) Therefore, we, the concerned members of the Shinnecock community, urge the town to acknowledge and to preserve ancient native American culture as a unique part of the “collective” East End history.

As members of the Sugar Loaf Hill Coalition, we are urging you to take this opportunity to be in solidarity with the aspirations of the Shinnecock people by the following:

2. Issuing a public resolution that commits the town to efforts preventing this from happening again.

3. Working with archaeologists to identify sites and to restrict developers from desecrating those sites.

4. Pursuing a course of response similar to our town neighbors of Brookhaven and East Hampton.

5. Adopting recommendations made to your governing body on November 25, 1988, by Professor John Strong of Long Island University, Southampton Campus.

Plots of this historic significance are sacred. These plots are our ancient “cemeteries” and must be recognized and protected. They represent the ancient Shinnecock tradition. They must be regarded as an irreplaceable and integral part of Long Island history. Effective planning and prevention are paramount to avoid future desecration of ancient Indian culture.

May we all work in harmony.
Respectfully Submitted,

In 1953, Archaeologist William Ritchie confidently defied the general outline of a religious system shared by indigenous people from the Great Lakes to Long Island, and south to the Potomac River (1955:61-65, 80-84). He continued to work on Long Island for three more years, excavating the Stony Brook Site and mentioned above and re-excavating Sugar Loaf Hill. He provided a chronology for the mortuary cult based on radiocarbon tests. The burials had been placed in these Long Island hills over a three hundred year period from 3,000 B.P. until 2,700 B.P. (1969: 75). These dates suggest that the mortuary cult may have been part of a cultural transition from the Archaic Period to the Early Woodland Period. 1

Below are photographs of the Sugar Loaf Hill prior to residential development in 1956. Images from The Stony Brook Site and It’s Relation to Archaic and Transitional Cultures of Long Island. 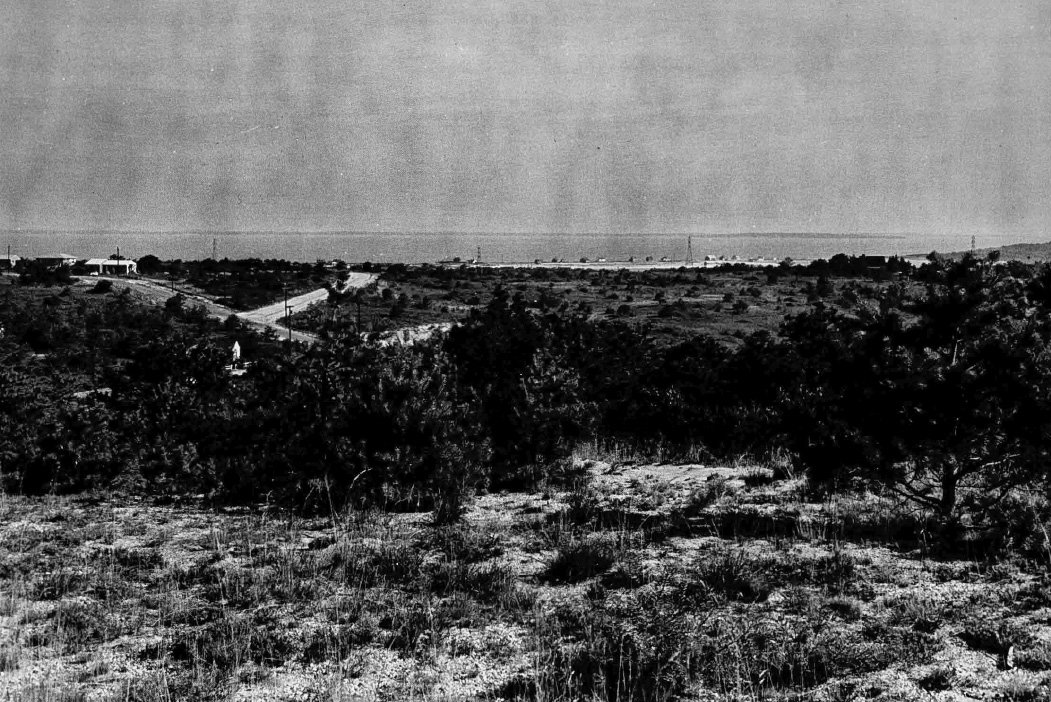 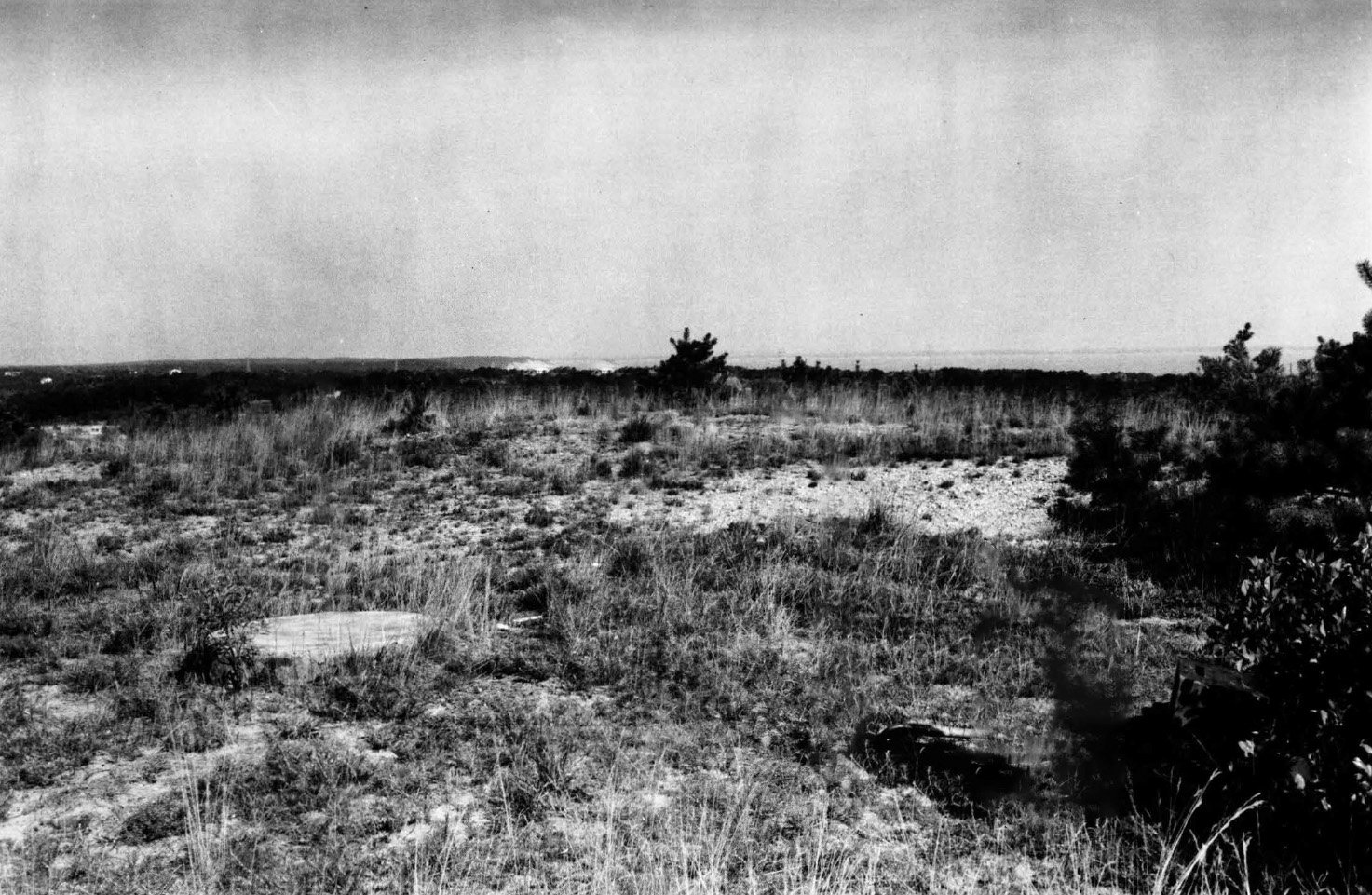